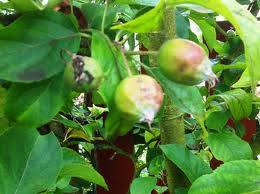 Apple scab is one of the most serious diseases affecting apple because the resulting loss supersedes any other losses resulting from other apple diseases. Infection by this disease can significantly reduce fruit yields and fruit quality and lower storage capacity and loss of tree shoot system.

The reduction in yields occur due to early fall of fruits caused by infection as well as by fruit distortion and irregular and incomplete growth. Loss of shoot system in severe infection stages when scab spots cover most of leave surface. Such loss often leads to tree weakening resulting in the failure of buds creation and could also lead to failure in next season fruiting. The loss resulting from reduction of fruit quality and lower storage capacity is considered the most serious aspect of the disease for apple farmers.